As many of you know,  I not only have a brick and mortar antiques shop and an Etsy shop, but I also do a few shows each year. My  favorite show, The Vintage Home Market,  is coming up very quickly and I have been busy planning and making. Martin and I even have ventured to make a curtained back drop for my booth to give it some extra character!

In a previous post I gave you a glimpse of some of the goodies that will be for sale at the market but now I have more to show you. These are all things that I have made. I will take pictures of the booth with the antiques also when I get it all set up on May 2nd. 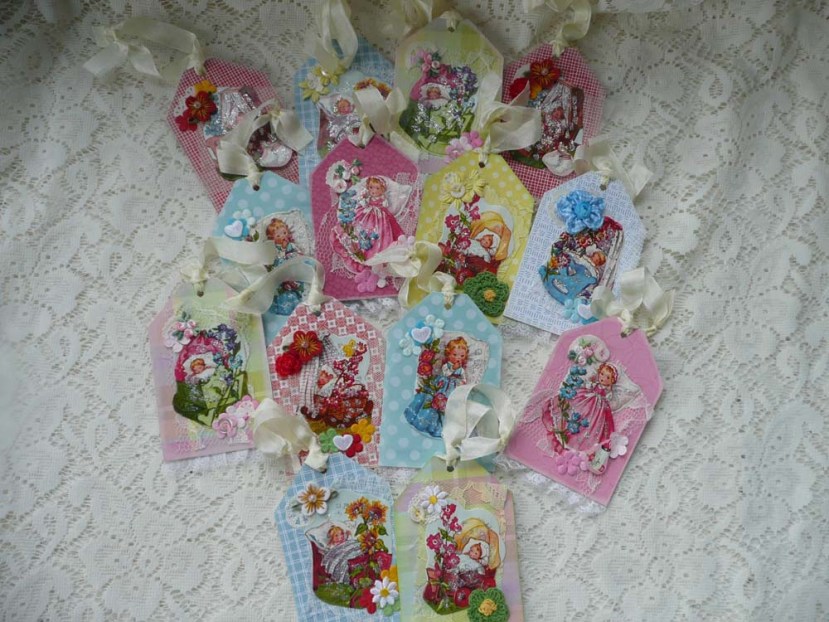 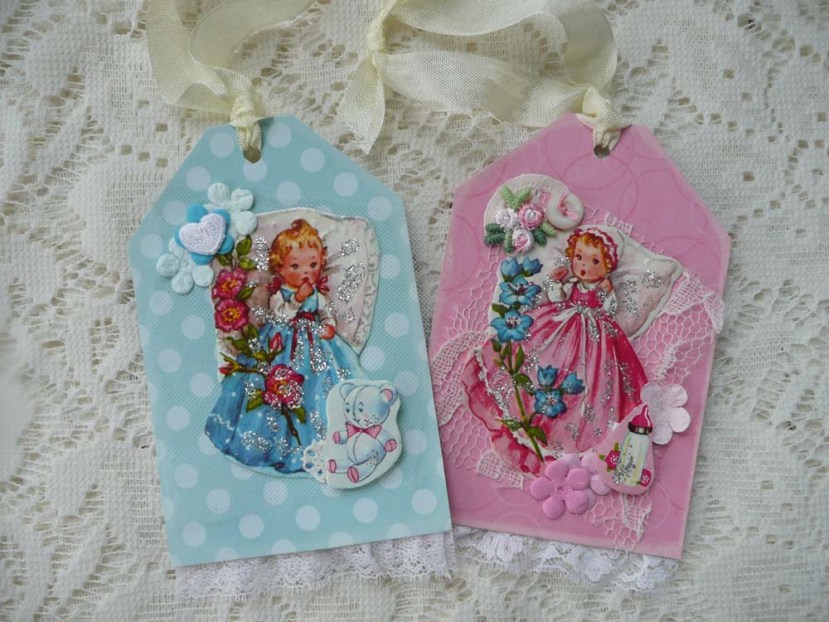 Close-up of some baby tags.

These are baby themed hang tags that I made using German die-cuts. Each tag is a little different but I think they all turned out really sweet. These tags can be used on a baby gift and then hung somewhere in baby’s room for a decoration. When baby outgrows them, they can be put in a scrapbook. 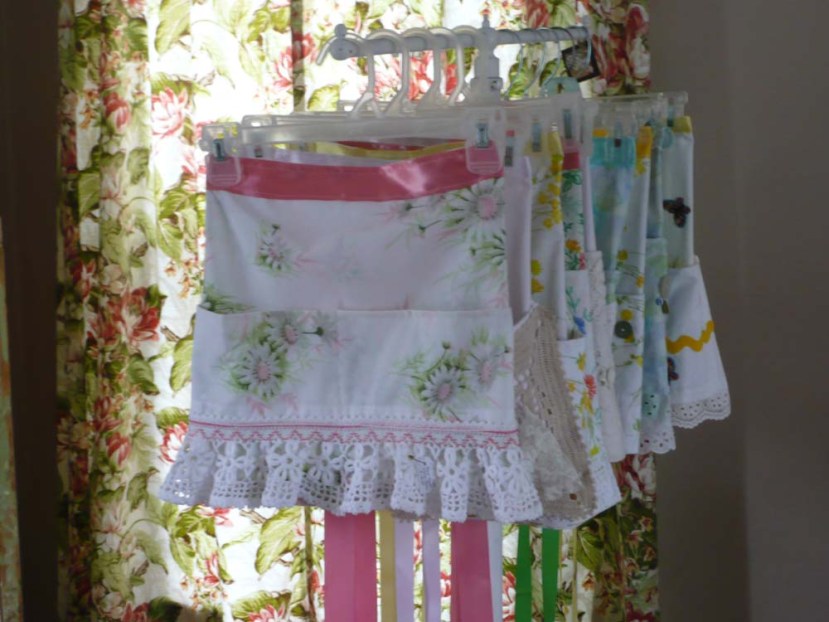 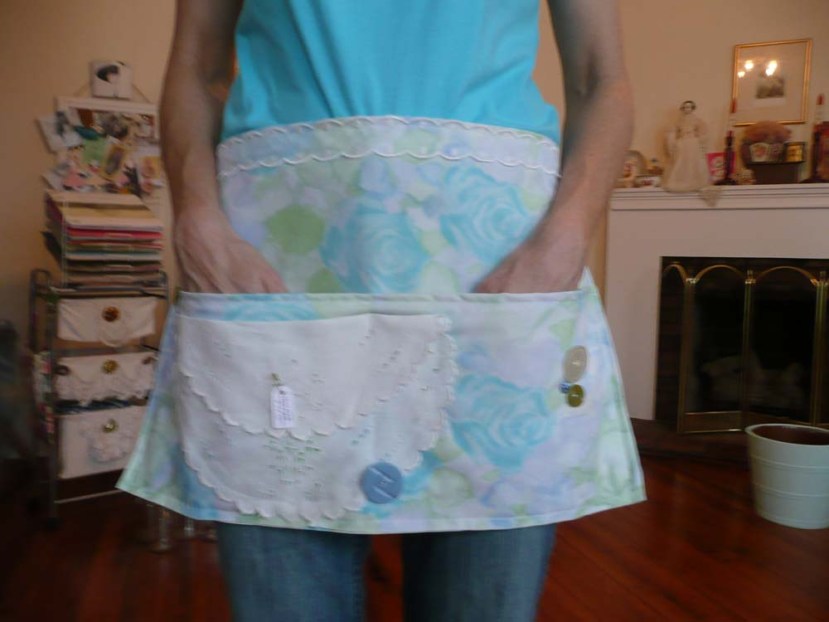 Horrendous close up of me wearing a utility apron.

I can’t believe I am even including the picture of me wearing one of the utility aprons but I wanted you to see how cute they are on. Instead you can see a very unflattering picture of my stomach looking poochy because my belt got stuck under the strap. These aprons really are cute when worn correctly and the pockets are large and deep so they hold lots of stuff! 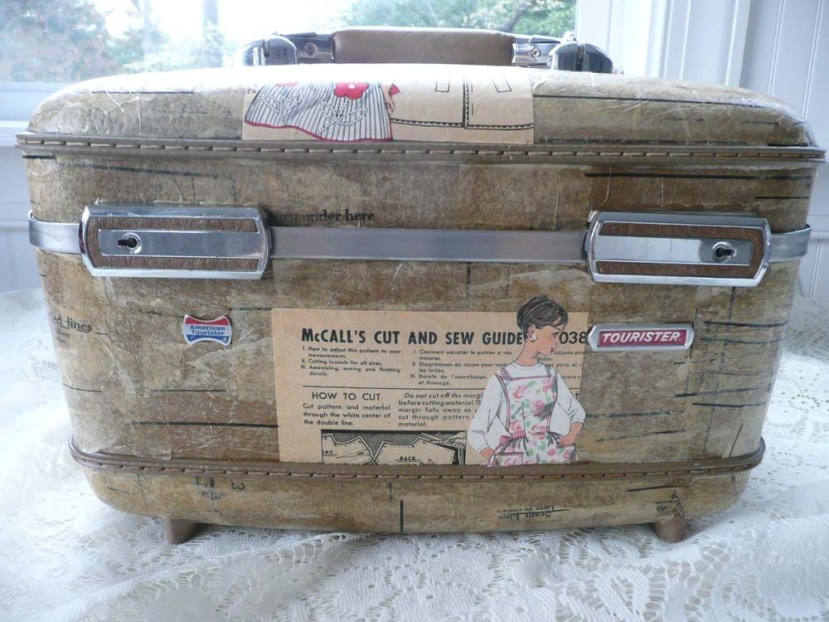 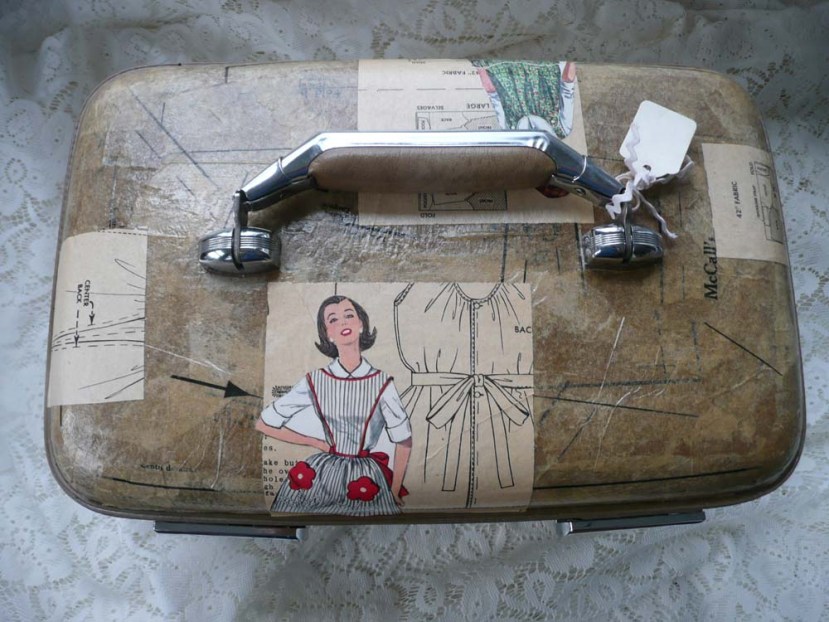 Here is another worn train case that was rescued with vintage sewing patterns and pictures. You could use this for make-up or art supplies when you are on the road! 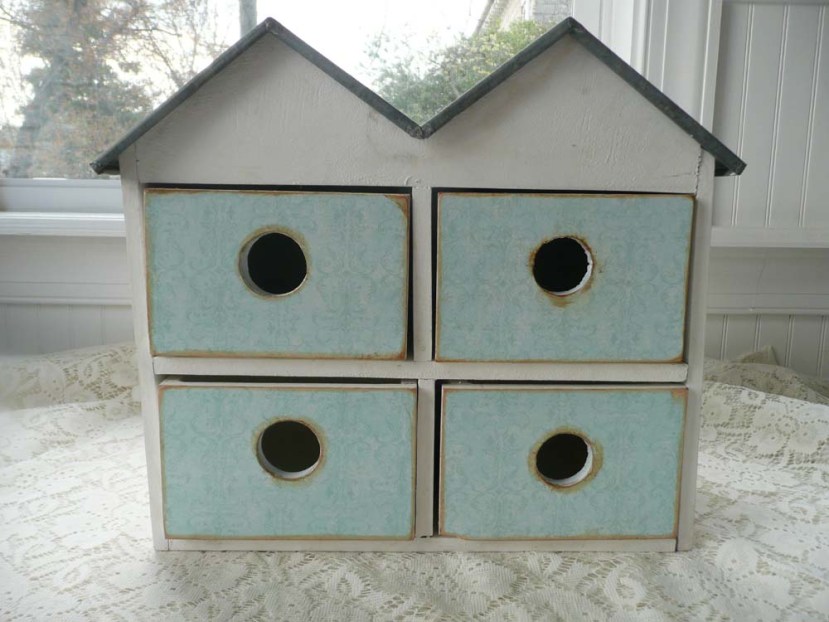 A little scrapbook paper, distress ink and Mod Podge transformed this boring little drawer unit into a cute hiding place for all sorts of treasures. 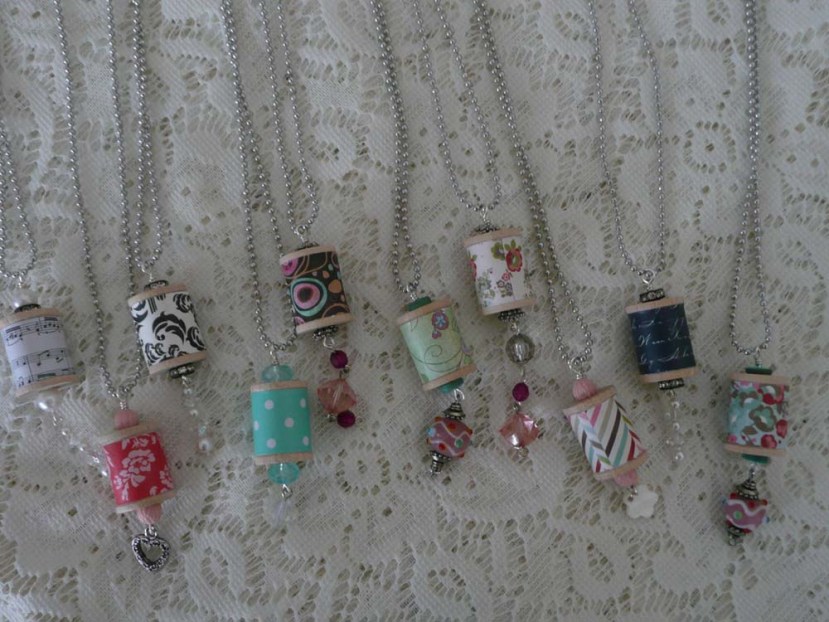 These regular sized spool necklaces have already been seen on my Facebook page, but I wanted to include them anyway. I also made a batch of tiny spool necklaces that have lace around the spool instead of patterned paper. 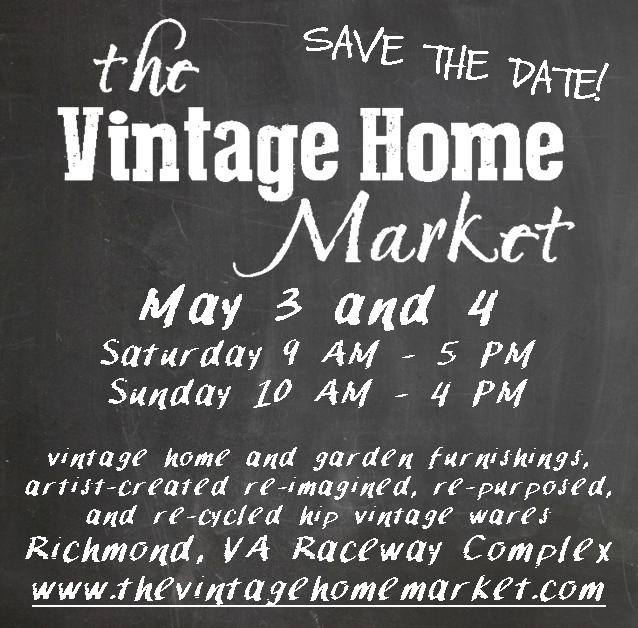 If you live, or are visiting, the Richmond area around the first weekend in May, you MUST come see this show. Everything at the show is either vintage or made (up-cycled) with vintage elements. Each booth is set up beautifully and with a lot of thought. Come on out and see the cutest show in Virginia. And plan to pick up some one-of-a-kind goodies for yourself, family and friends. Look for the Mossy Cottage sign and please introduce yourself if I don’t already know you. I love to meet new people, that’s my favorite part of the show!

There is no CHRISTmas without CHRIST. Here is my favorite version (NKJV) of the Christmas story (Luke 2:1-20) with pictures provided by me!!!

And it came to pass in those days that a decree went out from Caesar Augustus that all the world should be registered.2 This census first took place while Quirinius was governing Syria. 3 So all went to be registered, everyone to his own city. 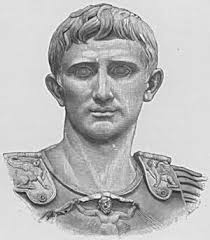 4 Joseph also went up from Galilee, out of the city of Nazareth, into Judea, to the city of David, which is called Bethlehem, because he was of the house and lineage of David, 5 to be registered with Mary, his betrothed wife,[a] who was with child.

6 So it was, that while they were there, the days were completed for her to be delivered. 7 And she brought forth her firstborn Son, and wrapped Him in swaddling cloths, and laid Him in a manger, because there was no room for them in the inn. 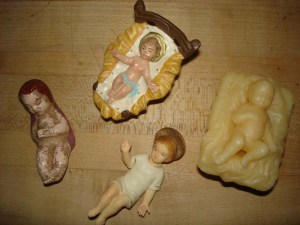 8 Now there were in the same country shepherds living out in the fields, keeping watch over their flock by night. 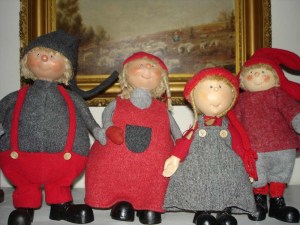 9 And behold,[b] an angel of the Lord stood before them, and the glory of the Lord shone around them, and they were greatly afraid. 10 Then the angel said to them, “Do not be afraid, for behold, I bring you good tidings of great joy which will be to all people. 11 For there is born to you this day in the city of David a Savior, who is Christ the Lord. 12 And this will be the sign to you: You will find a Babe wrapped in swaddling cloths, lying in a manger.”

13 And suddenly there was with the angel a multitude of the heavenly host praising God and saying:

14 “Glory to God in the highest,
And on earth peace, goodwill toward men!”[c] 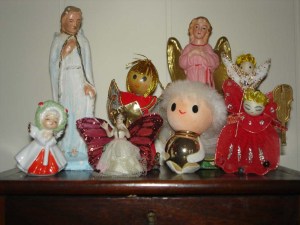 15 So it was, when the angels had gone away from them into heaven, that the shepherds said to one another, “Let us now go to Bethlehem and see this thing that has come to pass, which the Lord has made known to us.” 16 And they came with haste and found Mary and Joseph, and the Babe lying in a manger. 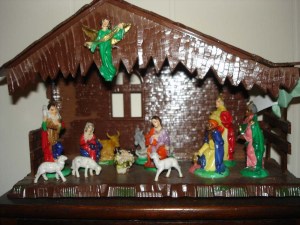 17 Now when they had seen Him, they made widely[d]known the saying which was told them concerning this Child.18 And all those who heard it marveled at those things which were told them by the shepherds. 19 But Mary kept all these things and pondered them in her heart. 20 Then the shepherds returned, glorifying and praising God for all the things that they had heard and seen, as it was told them.

I wish you all, dear readers, a very Merry Christmas and a Happy New Year!!!

Guess what I did today. No really, guess. I’ll give you a hint. It’s Friday so I have to go to my shop in Fredericksburg to put some stuff in and straighten it up. We have a potential hurricane about to hit and I need to get “D” batteries for our lanterns. We are out of soy milk  and cat food so I have to go to the grocery store. It’s the end of a very looong month and I don’t have any money left. I have a whole bunch of linens that need ironing and pricing. I have to dust and vacuum the downstairs of the house. Oh, and Adam has a DAC playoff soccer game this afternoon. So, did you guess what I did today? This is what I did… 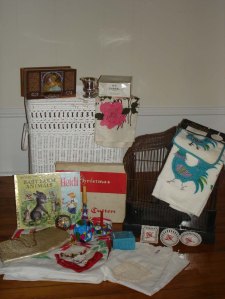 What have I done?

I went to a great big church yard sale in FredVegas. This is all the great stuff I got. I ended up spending money I had saved for something else. Don’t worry Adam, you can always go to “Bob’s School of Forensic Biology” instead of VCU! 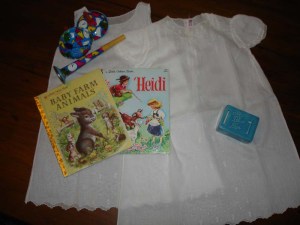 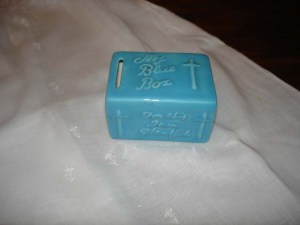 This cute vintage piggy bank for tithes says, “For this I am thankful” on  the side and, “My Blue Box” on the top. 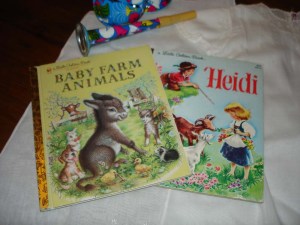 I also got a pretty white-on-white baby gown with a slip and some vintage party noise makers. 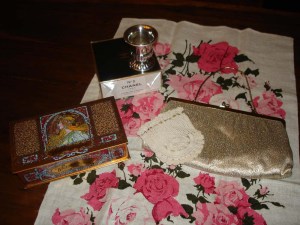 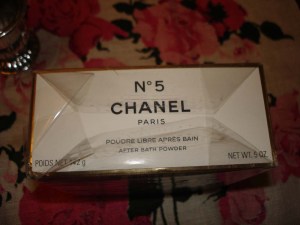 This unopened box of Chanel No. 5 powder is staying at home with me!!!! The rosy linen towel has never been used. There is also a sparkly gold evening bag and a tiny silver plated urn. The lacy thing is like a crocheted egg cozy, however, I’m thinking it would make a great pocket on one of my upcoming homemade aprons! 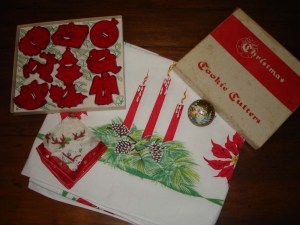 Because our house doesn’t already look like the North Pole exploded, I had to get more Christmas stuff. Check out the compete box of cookie cutters and the 1950’s print cloth. How could I just leave them there? But the cream in this lot is this.. 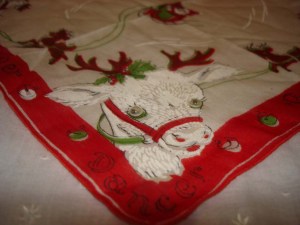 This 1950’s print hanky has all the reindeer’s names on it but it has a picture of Dancer. You can’t really tell from my award winning photograph, however, Dancer has actual googly eyes! You know, the ones that move around when you shake them. This is sooooo darn cute. 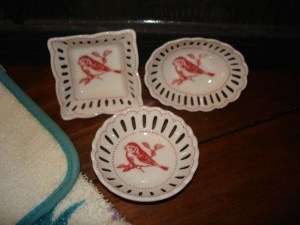 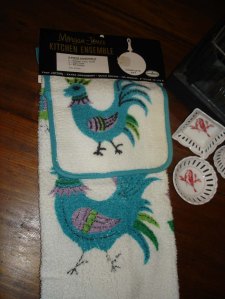 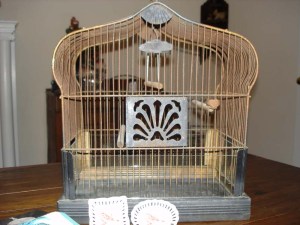 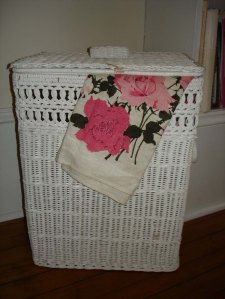 I had to display my rosy tea towel with the hamper so it didn’t look so lonely! So now you know what I did today. And by the way, the shop has been tidied, the lanterns have batteries, I got the soy milk and the FCS Eagles won the first game in the DAC playoffs. Go Eagles!!! Not such a bad day after all. So what will I be doing tomorrow? Ironing, pricing, dusting, vacuuming and going to the store to get the cat food I forgot!!!! Well, I never said I was perfect. 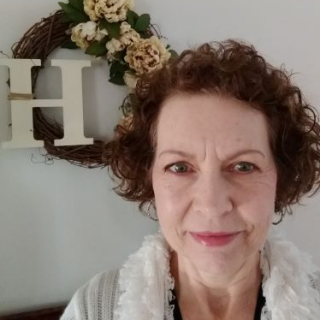